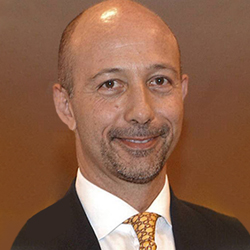 Stefano Pelle obtained a Master’s Degree with honors in Economics from LUISS University of Rome and a post graduate diploma in Marketing from the School of Management of the same LUISS. He completed his second Master Degree in Political Science from La Sapienza, University of Rome. During his career he attended executive education programs in renowned institutes such as HEC, ESSEC, INSEAD and London Business School.

For his work in South Asia, he received the high award of Knight Commander (Commendatore) from The President of Italy in 2006.

He published in 2007 the book “Understanding Emerging Markets: Building Business BRIC by Brick” (SAGE, New Delhi) and in 2013 “When not in Rome don’t do as Romans do” (SAGE, New Delhi). He also published several articles on various topics in management journals as well as newspapers and magazines He has cooperated with several Universities and Business Schools including INSEAD and since 2007 he lectures in LUISS University of Rome on International Marketing and LUISS Business School on International Business.