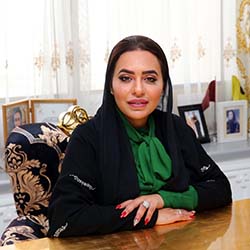 Rasha Aldanhani is an accomplished Emirati entrepreneur, renowned for her innovative ideas, daring approaches in business and inspiring philanthropy. She is the mastermind behind the famous PappaRoti Café, a unique concept experience based on a Malaysian bun. With hands-on management and dedication, Rasha created the café concept from scratch in the mid of the global economic crisis in 2009 at Dubai Mall, the largest mall in the MENA region. Under her leadership, PappaRoti Café expanded to more than 68 branches under her master franchise to cover MENA, CIS countries, Asia and Europe.

Rasha’s dedication and passion for excellence led her to rank number 56 among the 200 Most Powerful Arab Women for 2014 by Forbes ME and 14th among the 26 Emirati women who made it to the top 200. Today, Ms. Aldanhani Owns and manages seven successful companies: PappaRoti International General Trading, PappaRoti Investments, Al Rasha Investments Group, Al Rasha RSD, Brandnoise, Big Heart and most recently PappaRoti Boutique.

She won 16 local and international awards as a recognition for her positive approach to challenges, remarkable leadership and forward thinking. Rasha graduated in General Business with Honours from Dubai Women’s college and immediately dived in the business world equipped by her strong determination to succeed. She took-on leadership roles with blue chip organizations including Emaar Properties, Dubai Development and Investment Authority, Emirates Bank and Credit Agricole Indosez Bank, through which, she gained a great knowledge and experience in establishing and managing successful businesses. She is an Arbitration Consultant in International Commercial Arbitration at the International Arbitration Organization in Egypt and a member in Dubai Business Women Council.